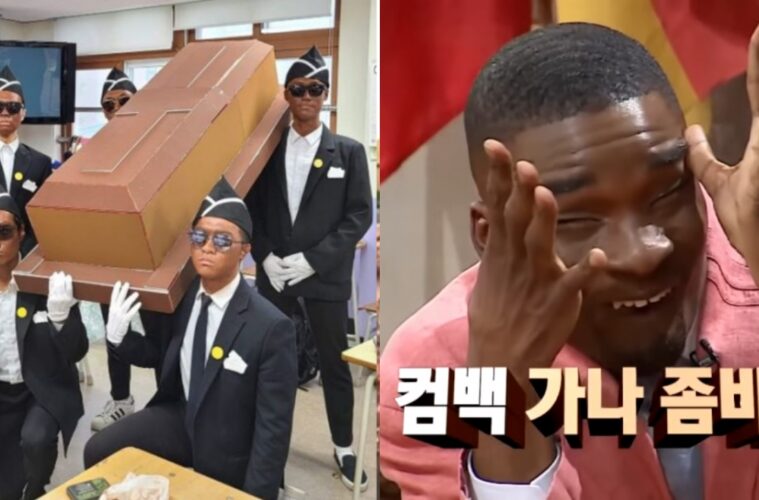 South Korean TV host Sam Okyere has been called out for hypocrisy after critcizing school students for using blackface.

Okyere took to his social media to call out Uijeongbu High School students for using blackface to portray the Ghana Dancing Pallbearers.

The Uijeongbu High School is well known for its students who parody key people of the year in their graduation photos.

In a statement on his Instagram, Okyere asked the students to “respect” different cultures.

“It is truly unfortunate and saddening that this is occurring in the year 2020,” Okyere wrote.

“As a black person, black people are very offended by such actions. I understand you wanted to reenact the culture but painting the face was not needed. I wish there aren’t such actions in Korea. Please, let’s respect each other’s cultures.”

Social media users were quick to then call Okyere out for his own racism, sharing footage of him mocking Asians.

In 2015, Okyere appeared on JTBC’s Abnormal Summit on the panel.

When it was Sam Okyere’s turn, the TV host pulled his eyes back and showed his front teeth.

After footage of his actions resurfaced, social media users called out Okyere for hypocrisy:

“He raises his voice over racism against black people but he does something that’s racist to Asian.”

“Wasn’t this competition just to use the facial muscles to make a funny face? Why did he need to use his hands like that.”

“What he did should be considered racism too regardless if he meant to mock Asians or not.”

“Painting someone’s face black is racist, and it’s the same for other countries. But we are offended if you slit your eyes like that too,” one social media user pointed out.

“If you were going to make a big issue of this, why did you slit your eyes like that?”

“Sam you should’ve just stayed still. I understand how you feel but I’m pretty sure the students didn’t do what they did with ill-intent.”

“Someone always said to me, before pointing out someone else’s faults, check if you didn’t do anything wrong yourself.”

“I think Sam just felt frustrated as a black person but understand the students do that trying to be racist.”