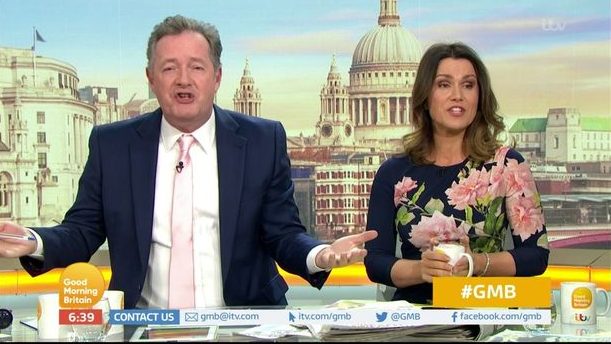 Earlier this morning the 54-year-old presenter was discussing how the Queen’s grandson Peter Phillips appeared in a Chinese advert for milk.

“At the next royal event, can you imagine Christmas at Sandringham is like – ‘I’m sorry your majesty, but I only drink yang yank yong ying ming milk.”” Morgan said.

Morgan’s co-host Susanna Reid responded with a sigh saying “Piers…” with a grunt.

When the ad was shown to viewers, Morgan tried imitating the video’s Chinese voice over by saying, “Ok then – ching chang chong, ok I got it.”

An unimpressed Reid responded, “for God’s sake… taking the mick out of languages is rather 1970s.”

“I’m trying to mimic the words of that advertisement!” Morgan said in an attempt to defend himself.

Social media users took to Twitter to express their outrage.

“Piers really thought the rest of the panel would laugh at him mocking Chinese people! Why is this man still given a national platform?!?” One person said.

“The 1970’s called, they want their Chinese stereotype back. Moron.” Wrote another.

Another person simply called for the presenter to be fired, writing “Sack him!”

#GMB @piersmorgan breaking too many rules, things are different in 2020, you are a dinosaur who needs to learn some new rules @itv @GMB

Little bit offensive there Piers. The 1970's called, they want thier Chinese stereotype back. Moron. #gmb

Piers really thought the rest of the panel would laugh at him mocking Chinese people! Why is this man still given a national platform?!? #GMB pic.twitter.com/WQNbePdBuO