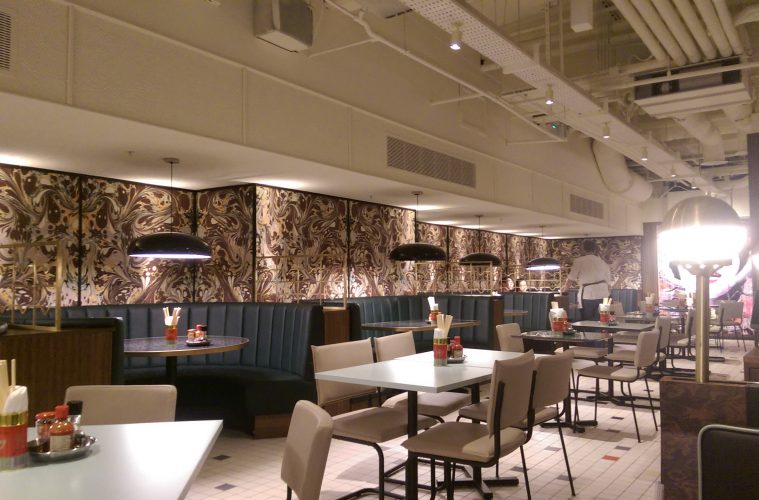 A contemporary take on Hong Kong style cha chaan teng cuisine in the heart of London.

Cha chaan tengs (literal translation: tea restaurants) are one of Hong Kong’s most beloved culinary institutes. They are living representations of Hong Kong’s unique history and culture. Popular with locals, these fast-paced hectic cafes are known for their affordable and eclectic menus which encompass both Cantonese and fusion Cantonese-Western style cuisine. Taking inspiration from this, Splendid Restaurant Group has teamed up with School of Wok’s Jeremy Pang to recreate this experience and atmosphere in the heart of London, albeit with a modern twist. 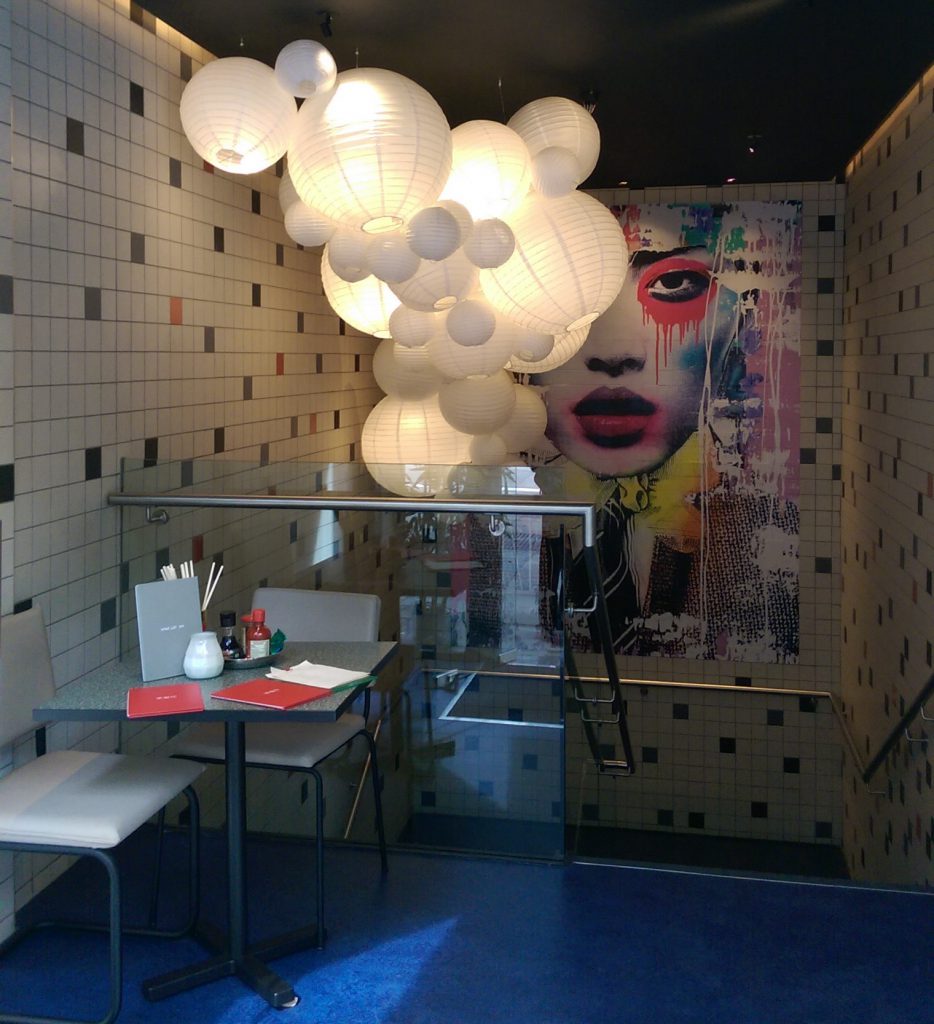 Cha Chaan Teng officially soft launched on August 8th and after hearing the buzz and hype through the grapevines, I gathered a group of friends together to sample it for a lazy late Bank Holiday lunch. Aside from some minor confusion due to a problem with the restaurant’s computer system, the reservation process was fine if a bit slow; largely expected due to the fact it was a soft launch. Its front house was rather inconspicuous and one has to descend a flight of stairs to get to the restaurant. I was very impressed with the decor and aesthetics, a fresh and elegant take on the institutes it took inspiration from.

The tiled floors, communal chopsticks pots and opened industrial ceiling were certainly not too dissimilar to the likes of Hong Kong’s Sun Wah Cafe or Kam Fung Restaurant.

Cha Chaan Teng managed to capture and recreate certain charms and aspects of a typical cha chaan teng but I was slightly confused with the inclusion of an art decor look which I felt did not compliment the primary theme.

Having been greeted and shown to our table by the very friendly staff, we ordered drinks first. Being in such a place, I obviously had to sample their Milk Tea. Despite being served typical cha chaan teng style, it was not the real Hong Kong thing unfortunately. The black tea was strong and powerful as I had hoped but instead of using the traditional condensed-evaporated milk combo, they opted to just use ordinary milk and sugar. As a result, the characteristic silky texture and taste associated with Hong Kong style milk tea did not materialize. My fellow diners opted for cocktails from a large selection designed by the mixologists Soul Shakers, all of them approving of their choice. The smaller selection of traditional Chinese teas on the menu, sourced from the Rare Tea Company, is also worth ordering for any tea drinkers and lovers. 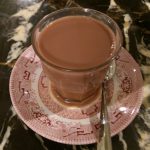 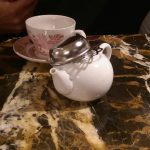 Between the four of us, we decided to sample a selection of appetizers which included Curried Egg Springs Rolls, Spring Onion and Kale Pancakes, BBQ Hoisin and Cola Ribs, Lemongrass Chicken Skewers and Popcorn Chilli Beef. These are not exactly food you would find on a traditional cha chaan teng menu but they were all well executed and delicious nevertheless. I was particularly impressed with the Curried Egg Springs Rolls; crunchy spring rolls generously filled with a Chinese style curried egg mixture. It was served on a bed of beetroot and drizzled with a trio of a light Japanese style mayonnaise, hoisin sauce and a spicy dressing, accompanied by wasabi mayonnaise. The Popcorn Chilli Beef was another personal favourite; nuggets of lightly battered beef tossed in a satisfying trinity of chilli, garlic and spring onion. All served in an American style Chinese Take-Away box to signify its fast food connotations. 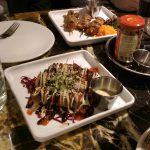 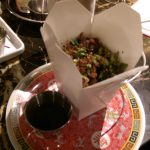 For the main course, I opted for the Crispy Coconut Spam, Pork and Prawn Wonton Macaroni Soup. Macaroni soup is a cha chaan teng staple and I remember eating my first bowl in Hong Kong, finding the concept of pasta in a broth base slightly surreal. As seen in the below picture, it was a busy and complicated dish. I could not get my head around the broth base, it was almost like a thin hot and sour soup instead of the light savoury broth I associate with macaroni soup. The large abundance of pickled ginger did not help with the soup’s cause either. My friend who ordered the Slow Braised Beef Shortrib, Spicy Meatball version noted the same with his soup base. The spam slice was nicely crisped albeit with minimal coconut flavouring but the wonton filling was too soft, almost pate-like and thus had no real bite or texture unlike the traditional wontons I’m used to. It was a rather disappointing and mediocre dish. 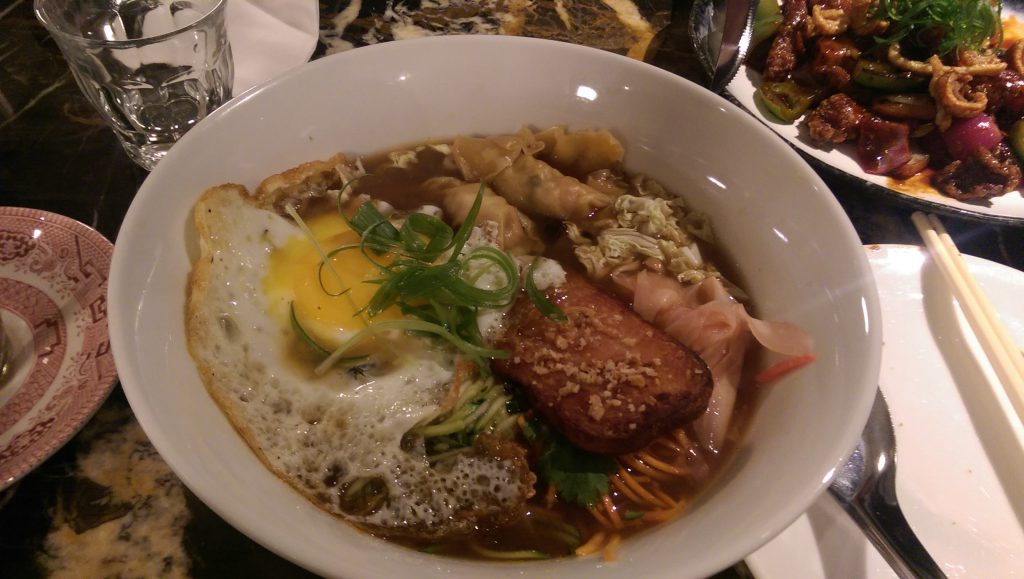 My accompanying Chargrilled Garlic Soy Pork Chop Crusty Tiger Roll, their take on the humble pork chop bun, made up for the above though. The only complaint was the pork chop was grilled slightly too well done in my opinion and thus was a bit tough. The crusty tiger roll in question was especially delicious, soft and fluffy inside with a sweet crunchy top exterior, obviously inspired by the Hong Kong’s pineapple bao, another cha chaang teng staple. For the table, we decided to get the Sweet and Sour Pork Shoulder, a classic Cantonese dish. The dish was not too dissimilar to its original incarnation with the only different being the great addition of crunchy five spiced crackling into the mix. Perfectly cooked tender but crunchy on the outside lightly-battered pork shoulder pieces were tossed in a moreish sweet and sour sauce with red onions, bell peppers and pineapple chunks. Special commendation to the sauce as it was not too sickly sweet or bright orange unlike typical take-away versions. Best dish of the meal I would say. The various Baos on offer are also worth checking out according to my companions. 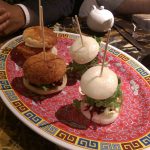 We were all pretty full after our mains but they was always room for dessert as they say. Our jolly waiter Phil strongly recommended the Peanut Butter French Toast so we ordered that to share alongside the Crusty Tiger Rolls which were served with butter and condensed milk. Both of which are typically found in any Hong Kong cha chaan teng and I was delighted by the fact they respected these classics and thus kept their incarnation simple and unadulterated. One of my friends ordered the Pandan Raspberry Ripple Artic Roll which was also well received. I should add at this stage that the service and hospitality offered to us was of a very high standard. Small things like the availability of more hot water for your tea and the ability to take away leftovers were good signs. 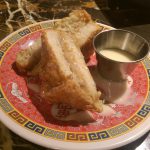 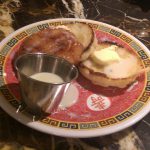 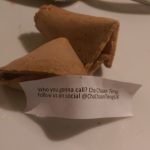 I admit I had some doubts about this place beforehand regarding how much of the cha chaan teng experience it was willing to honour or twist, starting with the fact they opted to use Simplified Chinese instead of Traditional Chinese in their name. In terms of authenticity, it is not what I had initially hoped for or liked, but if you enter Cha Chaan Teng without those expectations, you should be fine. They certainly have to ability to execute certain dishes very well (Sweet and Sour Pork Shoulder, Crusty Rolls) and others not so well (Macaroni Soup) plus being on the pricier side at around £30 per head, it’s not exactly somewhere to casually drop by for a quick meal on a whim. Nevertheless Cha Chaan Teng is still a very decent and classy Chinese-Western fusion restaurant in its own rights.