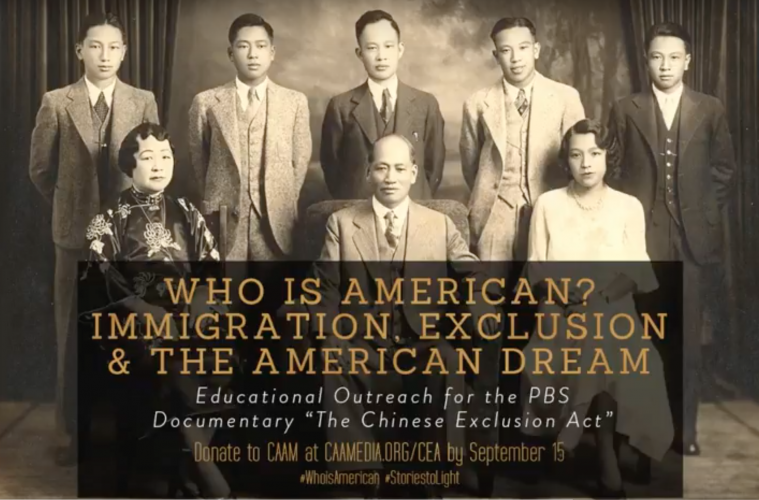 Support the discussion about the Chinese Exclusion Act

An organisation called CAAM (Centre for Asian American Media), is launching a crowdfunding campaign to support the awareness of the Chinese Exclusion Act.

The Chinese Exclusion Act was signed by President Chester A. Arthur on 6 May 1882, prohibiting all immigration of Chinese laborers.

The campaign, entitled “Who is American?” is supporting the PBS documentary, ‘The Chinese Exclusion Act’, in the form of educational outreach, which will run from Monday 15 August 2016 to Thursday 15 September 2016.

The campaign hopes to raise $50,000 in order to distribute free educational resources and to host community screenings to reach thousands of students, teachers and community members to spread awareness of the act and exposure to the film.

The PBS film is created by filmmakers Ric Burns and Li-Shin Yu of Steeplechase Films, whilst CAAM is co-producing the film.

By donating $25 or more by Friday 19 August, you will receive a regularly-priced ticket to CAAMFest 2017. CAAM is also offering a verity of perks, including tickets to the world premier of the film.

From the Centre of Asian American Media

This film sheds a light on the important connections between the Chinese Exclusion Act and the history of American civil liberties, immigration, and culture. By examining the socio-economic and geo-political forces that led to the Act, the film will uncover its unmistakable and wide-ranging consequences on national attitudes towards race, culture, politics, and society. At its core, this is a film about American identity, tracing the arc of what has defined being American from the time the United States was a fledgling republic through its astronomical rise as a world superpower.

“The 1882 Exclusion Law has been forgotten, but once we remember it, it is outrageous. And it’s probably why we’ve forgotten it because it is so outrageous. … How can this country, in its culture, in its politics, in its economics, do what it did against a whole class of people?” – Jack (John Kuo Wei) Tchen (Founding Director, A/P/A Institute at NYU)

The film guides viewers through the hardships and racial animosities that Chinese Americans faced throughout the duration of the law, including educational segregation, forced registration, and lynchings. THE CHINESE EXCLUSION ACT also reveals a forgotten history of Chinese American resilience and resistance to the 15 laws enacted by the federal government, as well as those passed at the state and local levels. By challenging the constitutionality of these laws and  the affronts to their civil rights through community organizing, civil disobedience, and the courts system, Chinese Americans brought 10,000 cases to federal courts and set a number of legal precedents that remain intact today. Through the lens of the Chinese Exclusion Act, a wider, deeply American story comes to life, one that embodies the issues of globalization, immigration, labor, and civil rights that continue to dominate headlines today.