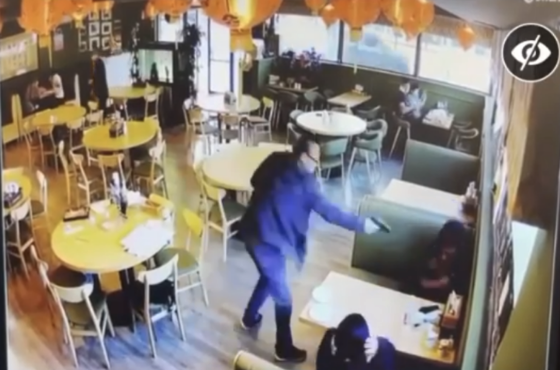 The couple have two daughters, aged 9 and 12

An Asian man has been arrested for fatally shooting his wife and another man in Los Angeles.

Jing approaches two people sitting in a booth, draws a gun from a bag and fires repeatedly at the man. As the woman stands up to pull Jing away, he shoots at her too.

The woman was later identified as Jing’s 36-year-old wife, Ling Ling Wang. The couple have two daughters, aged 9 and 12. Zhaiming Lee, 37, was identified as the other victim.

On Tuesday 6 April, Jing was caught and arrested at the Mexican border. The suspect was booked on suspicion of killing Wang and Lee. He is being held at the Inmate Reception Center in lieu of $2 million bail.

Jing is scheduled to appear in Alhambra Superior Court on Friday 9 April.

Authorities asked that anyone with information about the shooting to call the Sheriff’s Homicide Bureau at 323-890-5500. Anonymous tipsters can contact Crime Stoppers at 800-222-8477 or at lacrimestoppers.org.