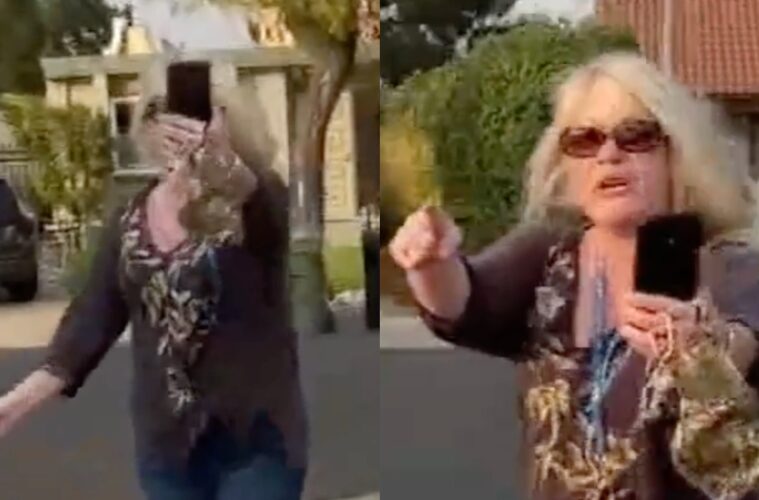 A Fremont woman was caught on camera making racist and homophobic slurs in front of her neighbour’s 10-year-old daughter.

Speaking to ABC, the Asian American mother said she and her daughter encountered the woman multiple times in one day.

Identifying herself only as Theresa to ABC due to safety reasons, the mother reported that she was initially very nice to the woman.

“When she first introduced herself I said ‘oh, it’s so lovely to meet you,'” Theresa said of the woman.

However, the woman then began questioning Theresa’s status.

“Whether or not I was a renter, she even told me how much my house cost,” said Theresa.

In the video, the woman is heard shouting, “go back to China” multiple times and walking towards Theresa, who tells her to stop because she is not wearing a mask.

The woman then reportedly made homophobic slurs, as Theresa’s 10-year-old daughter was standing by.

“I just thought that was really wrong,” the 10-year old said.

Nonetheless, Theresa does not wish to cause the woman any trouble but encourages people to speak out.

“We should have a productive and positive conversation about what’s going on so we can facilitate change,” she said.

Fremont police have identified the woman and have reported multiple calls about her. However, they added that the incident is not a hate crime as there was no threat or violence committed.

“Go back to China!” “Fa**ot! F**ge p**ker!” ⠀ This is just 1 of 3 racist rants Theresa & her 10-year old daughter were subjected to yesterday in their Fremont neighborhood. ⠀ Mom and daughter were so brave to speak to me exclusively today about the ordeal. ⠀ I asked how mom stayed so composed and calm. She said “I want to set a good example for my daughters.” She doesn’t want the woman to be punished— but hope she gets help. ⠀ Thank you for your bravery and class– it does not go unnoticed! ⠀ PS: Theresa and her family are Asian but aren’t even Chinese! ⠀ #theycantburnusall #hateisavirus #washthehate #fremont #bayarea #sf #sanfrancisco #racism #tolerance #kindnessrules