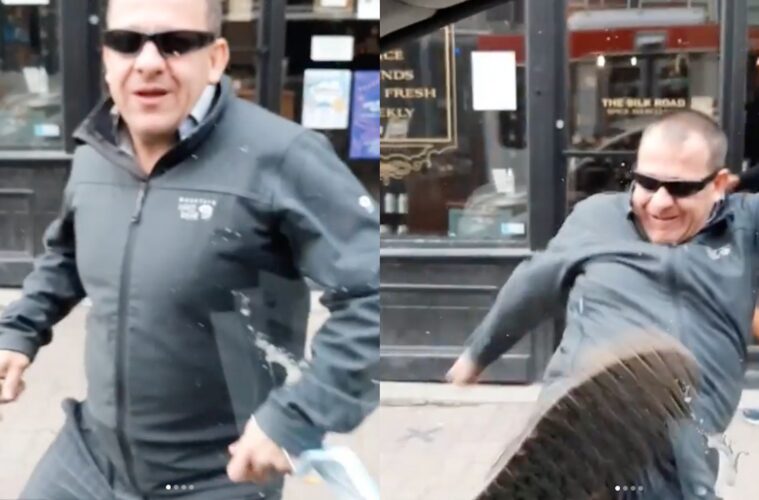 "All you fucking Chinamen are taking our jobs"

A racist Canadian who was caught on video kicking and spitting at an Asian man’s car has been charged with a hate crime.

Last week Instagram user Otis Chan uploaded the footage and explained in the caption that the man told him to “go back to your country chink” and said “chinky China.”

Chan also said the man wanted to fight him.

In the video, the man is seen spitting at Chan’s car window twice as well as kicking his door.

Mark John Koop, 39, has since been identified as the attacker and has been charged with mischief to property and causing a disturbance.

Further information about the incident, which occurred at 9:30 a.m. Monday in Calgary, was reported by Chan.

The Canadian-born Chinese man reported that Koop said to him, “Fuck you, you fucking Chinaman, you need to go back to your country.”

When Chan replied, “I’m just here doing my job,” Koop responded, “All you fucking Chinamen are taking our jobs.”

Chan drove away but the man followed, spitting on his vehicle and kicking the side mirror.

“It’s extremely upsetting considering this guy’s a complete stranger,” said Chan. “What happens if he does this to another Asian person or immigrant where they cannot speak English. They can’t defend themselves, or they can’t even speak up.”

“I don’t want the next generation to grow up thinking stuff like this is okay. It’s not okay,” said Chan. “In this day and age that we live in, it’s all about diversity.”

Calgary police arrested the man after local businesses helped to identify him.

“We take these investigations very seriously. We do rely on citizens of Calgary to bring this information forward to us,” said Collins.

“These offences have a larger impact into that community so it isn’t just one person that’s affected it has a wider message which is why we take it really seriously. We put a lot of time and resources into making sure that we investigate it properly.”

In other news, an elderly Asian mother was hospitalised in a violent racist attack in San Francisco.

Sadly, racism is still very alive and well. This guy, decided to approach me on site,then launch into a verbal tirade, everything from “chinky China” to ” go back to your country chink”, even wanted me to fight him. It pissed him off when I ignored him, and closed my window, resulting in him spitting on the window. I immediately left site, drove 2 blocks east,and parked to finish my paperwork. Lo and behold, he ran down and followed me there. This video is once I realized he was actually following me. After he kicked in my mirror, he ran into the building. I’ve now returned to the original job site and am waiting for police to arrive. This world needs a cleansing….. So how’s everyone else’s Monday going?