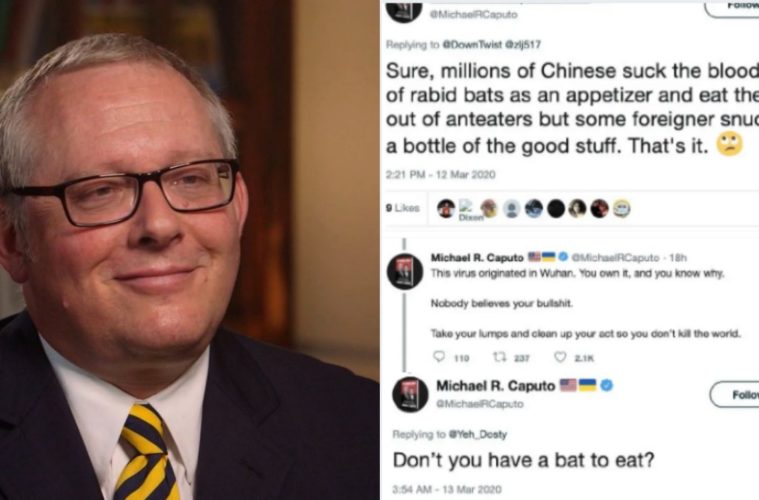 ‘Have a bat to eat?’: New HHS spokesman slammed for racist Coronavirus tweets about China

"Millions of Chinese suck the blood out of rabid bats... and eat the ass out of anteaters"

CNN reports that new Department of Health and Human Services spokesman Michael Caputo is coming under fire for now-deleted racist tweets about the Coronavirus.

Last week, the New York Republican was appointed as Assistant Secretary for Public Affairs at HHS.

His role serves to project the federal government’s response to the pandemic.

Upon his appointment, he erased nearly his entire Twitter history prior to 12 April.

However, CNN were able to access his almost 1300 deleted tweets, which have now resurfaced.

In one tweet on 12 March, Caputo wrote, “millions of Chinese suck the blood out of rabid bats as an appetizer and eat the ass out of anteaters.”

When another twitter user criticised Caputo’s claim, the 58-year-old replied, “don’t you have a bat to eat?”

“Double down on #ChineseVirus. Leftists lost the true meaning of ‘racism’ long ago. And polls show they’ve beaten this dead horse so badly that GOP, independent, and soft Dem voters ignore them,” Caputo tweeted on 18 March.