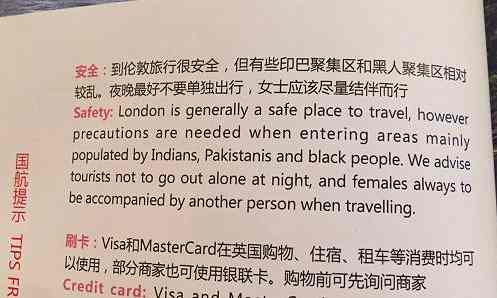 The airline's magazine advised precautions should be taken in "areas populated by Indian, Pakistanis and black people"

Air China has been slammed as being ‘racist’ for advising those going to London to take precautions in “areas populated by Indian, Pakistanis and black people”.

An image of the text from a monthly inflight Air China magazine, Wings of China, was posted on social media.

The full text read, “London is generally a safe place to travel, however precautions are needed when entering areas mainly populated by Indians, Pakistanis and black people. We advise tourists not ot go out alone at night, and females always to be accompanied by another person when travelling.”

The image was tweeted by Beijing-based producer Haze Fan of US news channel CNBC, who tweeted the picture to the Mayor of London.

Two UK MPs have since urged China’s ambassador to the UK, Liu Xiaoming, to issue an apology to their London constituents.

Virendra Sharma, a Labour MP for Ealing Southall wrote to Liu complaining about “blatant racism from the airline. 39% of the population of his constituency is South Asian.

Two MPs have urged Liu Xiaoming, China’s ambassador to the UK, to secure an apology to their London constituents. He wrote,

“I am shocked and appalled that even today some people would see it as acceptable to write such blatantly untrue and racist statements. I have raised this issue with the Chinese Ambassador, and requested that he ensures an apology is swiftly forthcoming from Air China, and the magazine is removed from circulation immediately.

I have invited representatives of Air China to visit my constituency of Ealing, Southall to see that a very multi-cultural area is safe, and would be of great value for those visiting London to see.

I will await their response, and if an appropriate one is not forthcoming I shall feel forced to question whether Air China is a fit company to operate in the UK.”

Meanwhile, Rosena Allin-Khan, Labour MP for Tooting, which has one of the largest south Asian populations in London said, “I think it is offensive to all Londoners, not just the ethnic minorities mentioned.”

“I am going to be writing to the Chinese ambassador to invite him to visit Tooting in London, where all races live side by side. Then they can see how we live and our wonderfully diverse community.”

The airline has two flights a day from Beijing to Heathrow and operates 98 international routes.